We all know how it was in Victorian times – we’ve seen innumerable films and BBC series showing precisely how they lived. But the households shown are large, with many servants, children going to boarding schools, the parents nobility or upper classes. 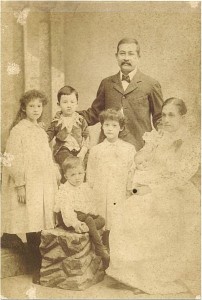 So that gives a picture for the nobs and the servants. Then there are people at the lowest end of the scale – small farmers, labourers, the poor and the criminals – Dickens was good with them. Then the army and navy – officers who came from the gentry, men who came from the lowest orders.
In between is a class where the father is a professional man who has gone through an apprenticeship as a surveyor, accountant, solicitor or the like, usually funded by his father. He might work for the landed gentry as a land agent, or have a small local practise. Or he might be a doctor, but not the high class doctors shown on television catering to the gentry, but one whose patients are the respectable middle class. Or he is a manufacturer on a small scale, a builder, or (with the coming of the new technology) a mechanical engineer. Very little dramatisation of this level of society has been done. And if you look on the internet, time and again you hear the extremes – this is how the poor lived, this is how it was for the rich.
So – I’m filling the gap as best I can.
The house wouldn’t be full of servants – maybe a cook, a young girl to do the chores, and, if Father could afford it, a housekeeper, though usually Mother would manage the household. When the children were small they would have a nursemaid, then a governess, then they (the boys anyway) would go to a local school. There might be a jobbing gardener, and they could have a small piece of farmland, though they might have to manage it themselves, and perhaps the sons would even have  do the manual labour on it. Almost certainly they’d have horses, who would be kept at livery nearby, and possibly a carriage. The house would not be large, and the family would be numerous, so the children would share rooms – not several to a bed like the poor, but not in lonely splendour like the rich.
The major difference, I feel, between that society and ours, is personal individuality. It was a hierarchical society, and people were taught from a very early age that their well being was of less importance than that of the family. So if the head of the family decided you would become a solicitor, or go into the church or the army, then that is what you would do. That was what would serve the family best. No doubt Father would usually take into consideration what he considered to be your strengths and weaknesses.
We have gone to the other extreme – the family matters very little to us now, and most children leave home and run their own lives as soon as they are of age. I am not sure if perhaps we have gone too far. Previous generations have a lot of useful working knowledge of life. The trouble is they tend to present it in a prescriptive manner which jars on their individualistic young.